I have no idea how I ended up with Tove Jansson’s The True Deceiver in my book bag.  (Tove Jansson is the author of the Moomintroll series, which is wonderful also, but in a different way.) Did I see it on one of those “other people bought this” recommendations on Amazon?  Did a blogger mention it?  Was it face up on a bookstore table?  Where do our books come from, anyway?    But if I get into THAT then I will not write about THIS, which is, right now, more interesting,

The True Deceiver is a simple story, set in a village in Scandinavia during the winter.  The writing is beautifully spare, psychologically astute and the story it tells is an utterly unique one, or at least it was to me.  The story is driven by the desire of Katri, a  woman the village children call a witch because she has yellow eyes and a wolf-like dog, to find a home for her brother who seems to be “simple” but might just be quiet.  Katri, who is a business-like, straightforward, truth teller,  focuses on Anna, an innocent-seeming, older woman who is the author of children’s books which feature meticulous drawings of the forest floor in the spring and rabbits covered in flowers.  The two women could not be more different and it is inevitable that when Katri comes into Anna’s home and uses truth as a kind of deceit neither of them will be the same when the snow melts.

The book is about honesty and artifice and what happens to us when we encounter and engage in them.  Jansson has a remarkable eye and ear for human behavior and a true compassion for her characters.  She began writing for adults when she was in her 50s, and I wonder how much that has to do with the beauty of her work.  It’s as though she’s figured out just how much she needs to say and no more.  Like Marilynne Robinson’s Housekeeping, True Deceiver is a meticulously crafted novel that carefully charts the relationships among an isolated group of characters.  I’d put it in the literary fiction category of my summer reading, although it’s so transcendent that I wonder if maybe we should invent another category for it.

Let’s see, points totals:  Nobody recommended this, not as far as I could tell, so not points there.  I did not check it out from the library (which makes me think I bought it at a bookstore.  Or stole it, since I can’t remember where it came from — a little bit like Katri, actually.)  Definitely  no points there.  But I did write it down and write about it and I snuck in Housekeeping in case you’re wondering what other beautiful book it reminds me of.  30 BlogLily Summer Reading Program Points.  (But then I don’t get the boomerang — or other prize —  because I’m pretty sure that’s totally not allowed.)

A few years ago, I did a writing residency at the Atlantic Center for  the Arts in Florida.  It was magical, that place.  They had a room full of beach cruisers for us to ride — and the ocean wasn’t very far.  The writer who was the “master artist,” Antonya Nelson, turned out to be called Toni, and to be not in the least bit scary, which was my great fear.  I got a lot done there.  And I became friends with some really remarkable women.

One of these women was Ellen Sussman.  I’d been seeing her anthologies around in bookstores with provocative names like Bad Girls, and Dirty Words (which has an essay in it by my first writing teacher, Thaisa Frank) and honestly, I was as intimidated by her as I was by Antonya Nelson.

And then I met Ellen and she wasn’t intimidating in the least.  What she is, among many other things, is a really disciplined writer.  While we were in Florida, she sold French Lessons, a novel that she had been sweating over for quite a while, to get it just right.  Apparently, she got it even more than just right.  There was an auction and a glamorous trip to New York to meet with her new editor and a bunch of other stuff that left me speechless because it seemed so, well, professional.  And then there was champagne.

And here’s the book.  It just came out.  It’s wise and bright like Ellen.  And quite moving.  It’s the sort of book that makes you feel just a little bit more alive, more awake, and grateful that Paris exists and people like Ellen are around to write about it.

So, champagne all around. 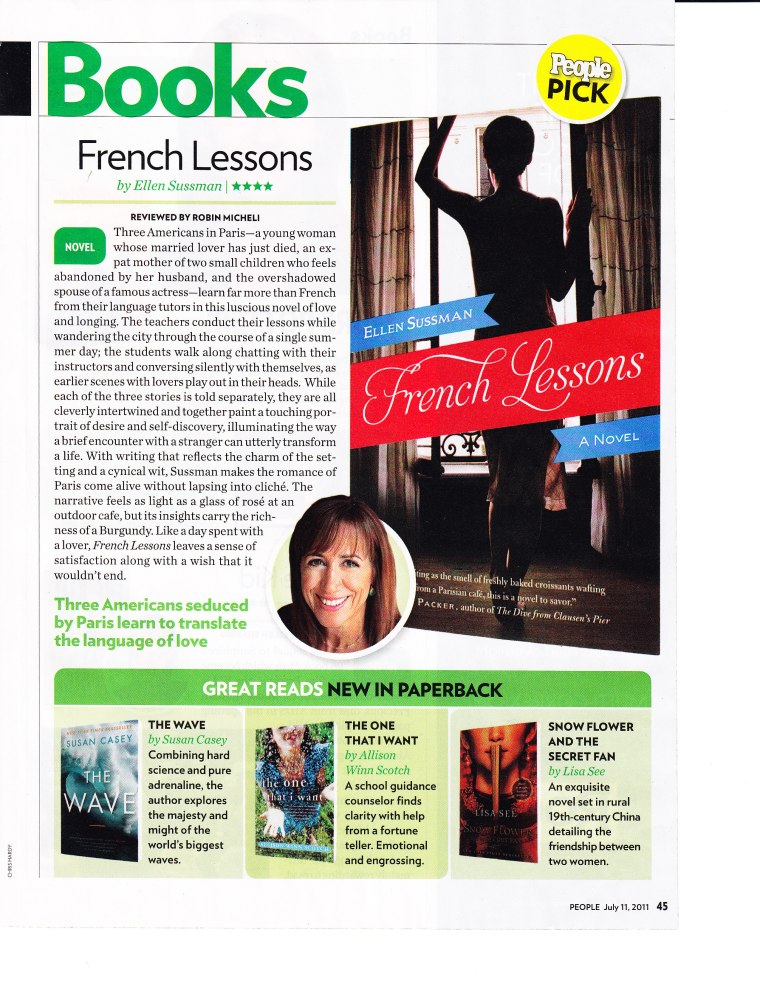 Summer.  I keep wanting to photograph it, but my camera disappeared into teen world, where it’s being used to document gravity-defying skateboard tricks.  Surely, the looks told me when I asked for it back, a mere peach cannot compete with anti-gravity.

Maybe not.  But they are everywhere, these peaches.  And even though I know that one day in a month or so from now they’ll be gone, they feel permanent.  That’s what the deep middle of summer feels like.

Summer’s arrived here at the bloglily household.  There is general happiness, and a movement spearheaded by the non-parents to suspend all routines, including the one that gets everyone into bed before the sun rises.  So far the adolescents and the ten year old who’s actually 40 are winning that one.

If you’re surly enough, and I’ll admit that this describes my general demeanor about half the time, you might trudge through summer without acknowledging its wonderfulness because you, after all, don’t get to suspend all routines.  But at least you get to read summer books, which is way, way better than going to see summer movies.  Summer books, at their best, leave you satisfied.  Summer movies, even at their best, make you feel like you’ve eaten at McDonalds, and although  maybe it was okay at the time, you really wish you hadn’t.

So.  Summer books — for me — mean spy books.  I love spy books.  I like the whole noirish atmosphere of a good spy book.  I love the lone operative, the hero who behaves well, but somehow all the odds are against him.  (Why can’t I think of any spy books where there’s a decent woman spy?)  A couple of days ago I spent the whole day reading, which meant that we had frozen costco lasagne for dinner (here in Berkeley, that’s when they send the child protective services to your house).  What kept me from whipping up an organic, vegetable-filled dinner was Alan Furst.

I really like Alan Furst’s books.  They’re all set in dark, rainy corners of Europe, on the eve of the second world war.  There aren’t any Americans in these books, or hardly any.  The most recent one is called Spies of the Balkans. I will not tell you what happens in it because you could probably guess.  Okay, I’ll tell you some things.  Is there a spy who’s a Greek police officer, who’s ethical, but not above trickery when it’s necessary to protect the innocent?  Check.  The occasional furling and unfurling of an umbrella because it’s always raining in the countries Hitler’s about to invade?  Check.  Sex?  Check.  Daring rescues?  Check. A general atmosphere of a world going to hell, during which tremendous acts of courage occur?  Check.

Like I said, I read the whole thing in one day.  I never do that.  Happy Summer!

There was an error retrieving images from Instagram. An attempt will be remade in a few minutes.